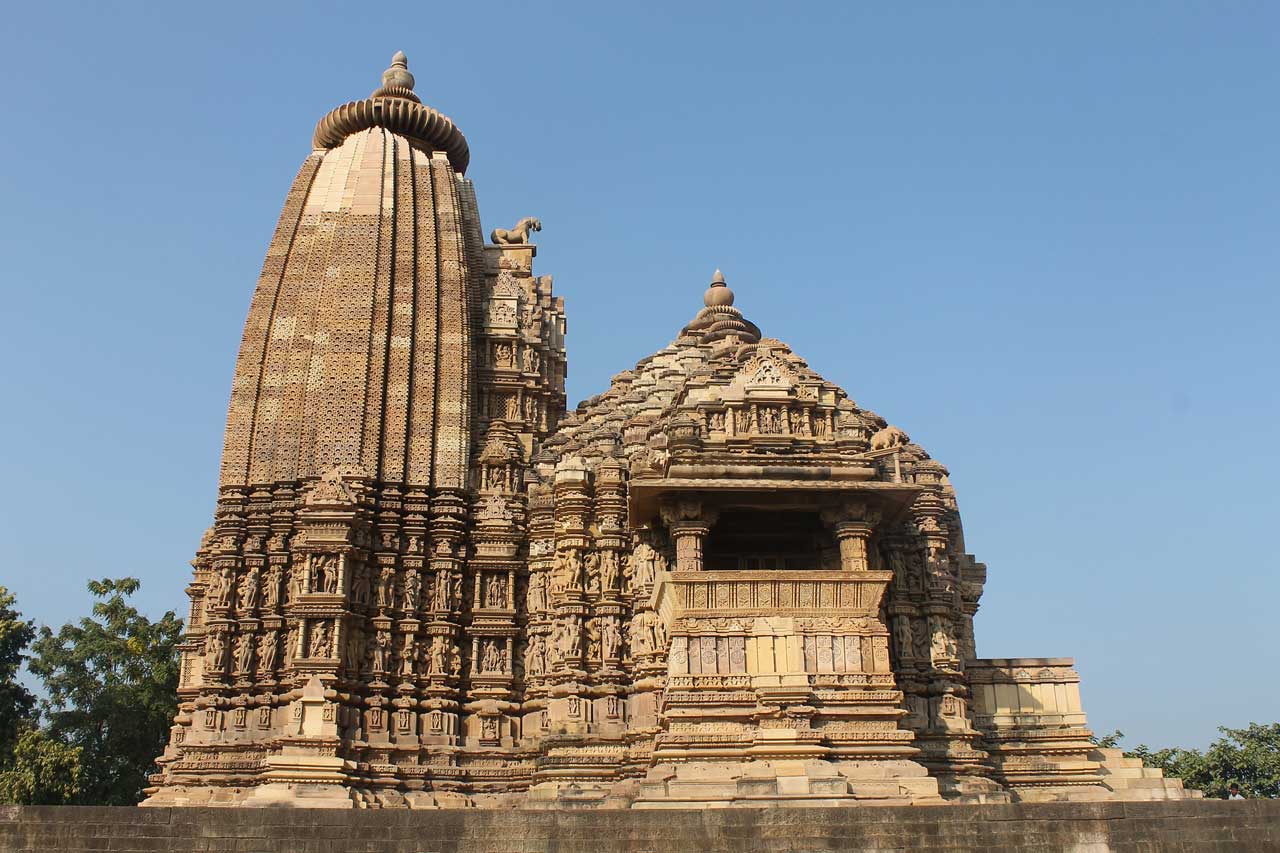 The magnificence of Khajuraho
temples, the glory of ruins, and elegant example of historic art are the
driving forces that impel the honeymoon couples to explore this glorious blend
of simplicity with the intricacy of Khajuraho.

Its alluring caves provide
excellent opportunities for honeymoon couples to dive deep inside the exotic
beauty. Khajuraho Group of Monuments of Central India is something beyond
timelessness that promises to take honeymoon couples on a scintillating ride.

Other than temples, Khajuraho has
natural beautiful places like waterfalls, national parks, sanctuary, and other
sightseeing places also available for couples to celebrate their honeymoon
period. Khajuraho is situated in central India so reaching from any part of
India is easy.

India has lots of honeymoons
places to visit but the Khajuraho is the best honeymoon destination because it
teaches the couples the real meaning of sexual life and honeymoon. In India
society is very less opened regarding sex education, so adults or teenagers not
able to learn these things. 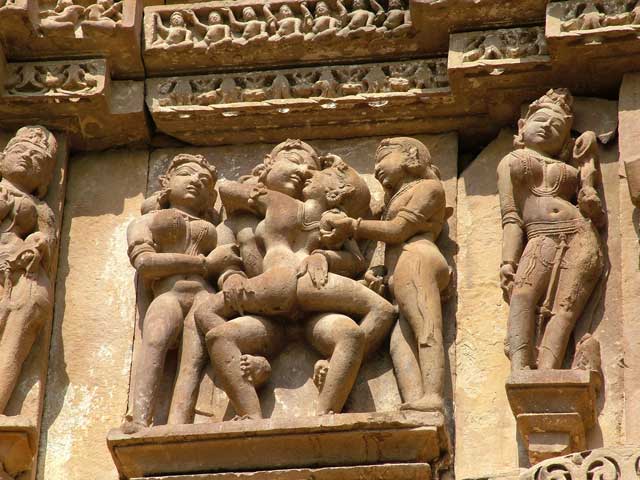 The newly married couple who want
to learn the Kamasutra of married life must come here to see the historical
real temple of sexual life. The honeymoon couple can see the various sexual
sculptures postures on the wall of the temple.

Khajuraho is situated in central
India and holds a variety of tourist places for the tourists or couples who
come here like temples, sightseeing places, waterfalls, caves, National parks,
etc. These things make it a perfect honeymoon destination for couples in India.

You Should Read: How to Plan Honeymoon in India

Temple to Visit in Khajuraho

Khajuraho is world-famous for its
group of monuments that were mainly built during the Chandella dynasty (950 AD
-1050 AD). Khajuraho has mainly lots of temples for travelers, tourists, and
couples to visit. At present there exist around twenty-two temples that have
been sub-grouped to eastern temples and western temples.

This temple is mainly devoted to
a Jain saint named Adinath. It is prolifically decorated with chiseled figures,
together with Yakshis. Inside the temple premises, there are three Hindu
temples.

One of them of the Brahma, having
a four-faced lingam. The second temple of the lord Vamana, which is festooned on
its outer walls with a statuette of apsaras in numerous aesthetic postures. The
third temple of the Javari has an eloquently carved gateway and peripheral
sculptures.

Temple’s name is Brahma Temple
but it dedicated to Lord Shiva. It is about the ninth or early tenth-century
temple. Temple architectural brilliance is constructed on the banks of Khajur
Sagar and made in granite stone with Shikhare, along with sandstone.

Temple has actually a four-faced
Lingam was previously considered Lord Brahma. But later it found that
is a Shivling. The statue of Shiva lingam is extremely beautiful and creates a
pious atmosphere all around.

Ghantai Temple is a small and
unique Jain temple. It is now ruined condition and located at the eastern group
of temples Sevagram Khajuraho. It is also named Ghanti temple, dedicated to
Jain Tirthankara Rishabhanatha. It has a Frieze, which exhibits 16 dreams of
Lord Mahavira’s mother. Along with this, the temple also has a statue of a Jain
goddess on a winged Garuda. This temple is the part of Khajuraho Group of
Monuments and a UNESCO World Heritage site that was built in 995 CE.

The Lakshmana Temple is dedicated
to Vaikuntha Vishnu. It was built by Yashovarman. This architectural excellence
is located on the western side of Khajuraho with statues of Brahma, Mahesh ad
Vishnu with incarnations of Varaha and Narasimha. The exoticness of the temples
comes out with the carvings made on the walls with much intricacy.

The Kandariya Mahadeva Temple is
the largest temple in Khajuraho with a soaring height of 31 meters and has
typical Aryan-style architecture. This temple is dedicated to Lord Shiva and
the sanctum has a beautiful Lingam.

It is the best example of temples
preserved from the medieval period in India. The building of the temple is
marvelously carved with sculptures of gods, goddesses, celestial beauties, and
Maithun couples.

The Duladeo temple is dedicated
to Shiva. Known to be the finest temple in Khajuraho with the name of Kunwar
Math, it has some of the most beautiful sculpture art in the form of
Shalbhanjika. The premises have ardhamanadap, the Maha Mandapa, the Mandapa,
the Antarala and the

The Chausath Yogini Temple of
Mitaoli in district Morena, also known as Ekattarso Mahadeva Temple. It is
situated at high hills of about a hundred feet. This splendidly beautiful temple
is dedicated to Goddess Kali. It is one of the earliest surviving shrines made
out of granite and dates back to 900 AD. It is the circular type of temple that
shows sixty-four yoginis. The temple circular wall has 65 chambers, for 64
yoginis and the goddess Devi, and an open mandapa in the center of a circular
courtyard for Lord Shiva.

Chaturbhuj Temple is mainly
dedicated to God Vishnu. It is located in Orchha in Madhya Pradesh. It is
situated at a distance of 3 km from southern Khajuraho stands the artistic
remains of two temples – Lord Shiva having a pearl white marble Lingam and 11
feet tall statue of Chaturbhuj (Lord Vishnu). The honeymoon couples can
experience eternal bliss and tranquility at the premises of these marvelous
temples.

Tourists or couples can see this
temple on the way during moving to the western group to Khajuraho village. The
scintillating ruins of the Hanuman temple in Khajuraho date back to the times of
Maharaja Harsh in 922 AD. It has a marvelous statue of Lord Hanuman, which is
8ft high and beautifully carved. An ancient inscription is there below the feet
of Lord Hanuman.

You Should Read: Best Honeymoon Spots in India

Places to Visit in Khajuraho

Other than temples Khajuraho has
lots of places to see for couples during a honeymoon trip. Some of them listed
below.

Panna National Park is actually a
Tiger Reserve Park is home to several species of wildlife like Tiger,
Sambar deers, Chitals, Chinkara, Sambar, Four-horned Antelopes, Jackal, Nilgai,
and Wild Boar. There is a beautiful Ken River flowing across National Park which
is very clean. You can see plenty of very beautiful birds and reptiles like
crocodiles.

It is an absolutely perfect place
for trekkers and nature lovers. Couples can spend some time here to make their
honeymoon some adventurous. It is about 100 Km far away from the Khajuraho.

Raneh Water Falls is a natural
fall on the river Ken in Panna National Park of Chhatarpur. Couples can see
its real beauty in monsoon season. It is about 30 feet deep canyon of colorful
rocks. It is the best to place for nature lovers and less crowded than other places.

This place has Pandav Falls that
look so beautiful in winter. There are caves and temples near the waterfall.
These places in just 35 km far away from Khajuraho. According to legends,
Mahabharata Pandavs came here.

The Ken Gharial Sanctuary is a wildlife sanctuary in the Panna, Chhatarpur.
Couples should go early morning to see the animals. Couples can see
birds, deer, monkeys, vultures, peacocks, etc. Gharials with kids bask in the
sun on the bank of the Ken River.

Things to Do in Khajuraho

For honeymoon couples, there are
lots of things to do at Khajuraho such as visiting popular temples, sightseeing
places, watching Light and Sound Show, try Khajuraho’s street food, relaxing at
Ayurvedic Spas, Jungle Safari, and many more things.

The winter season is the best
time to visit Khajuraho. So couples can plan accordingly for their honeymoon
trip at Khajuraho. The ideal months start from July and up to March month.
Tourists or couples should avoid the summer season for visiting the Khajuraho.

The peak months of the Khajuraho
are October to February. During this period lots of visitors come here from all
over the world to visit its historic temples.

How to Reach Khajuraho

Khajuraho is well connected by
the railway, airways, and roadways. There lots of flights available from Delhi
and metro cities for the Khajuraho. Khajuraho railway station also well
connected by the metro cities and nearby railway stations like Agra, Lucknow,
Varanasi, New Delhi, Bhopal, Jaipur, etc. Lots of state roadways buses and
private tour operators buses available for the Khajuraho.

If you thinking ‘How much time to
spend in Khajuraho?’ then it purely depends on you, what things you want to see
at Khajuraho. For honeymoon couples who come here to celebrate their honeymoon
here a minimum of one week required. There are lots of luxurious hotels
available where couples can stay and enjoy their honeymoon trip.

6 Amazing Things to do in Varkala | Trawell Blog